Updated at 4 PM , 8th Oct – The Delhi hig court has asked the government to take action. One – Find out how many politicans own Blue Lines. Second, though i just hear a bit, is that the plan to phase out Blue Lines to be sent in by Thursday this week. Let’s see what develops.

It turned out to be one of those rare Sundays where i actually managed to get some news time in and right from the morning all the way till i went off to sleep at 1 AM , everyone was talking about Blue Line Buses in Delhi.

The enthusiastic coverage had been generated by another accident near Faridabad which resulted in 6 people being killed. The bus was speeding ( 60 kmph in a 40) and ran into people who were getting off another bus. Total death this year , by these buses , is at 93. In typical Indian style the mob beat up the driver, destroyed the bus, police did not do anything and news media started the age old discussion of whether they should be banned and how everyone in Delhi is afraid of them.

After listening for a while i finally got fed up and had to pen this down. The way i see it is that 50% of that 93 probably deserved to die. Most Delhiites  have no manners- be it driving or walking. I drive only 2 kms’s to work everyday and 4 out of 7 days i almost end up hitting someone..not because i drive too fast , or dont concentrate but people here tend to spring out onto the road like rabbits, one would almost imagine that they wanted to get hit..maybe its a new suicidal technique…

Last month at 9 PM near the Interstate Bus Terminal 7 cars got involved in a pile up in front of me..why…

END_OF_DOCUMENT_TOKEN_TO_BE_REPLACED

I bang my head and twinkle my toes every time i am returning back to the city from somewhere where i have been to in my car. I just got back from Chandigarh last Sunday. Covered 220 Km’s in less than 3 hours and the remaining 40 to Defence Colony from the Boarded took me almost 1.5 hours…. a sheer waste of time!

Look at the picture below, this is just after i entered the border, and i was going so slow that i could take out my phone and start taking snaps. Nice wide road, almost no traffic….and now look at my speedometer…ya sad right..? 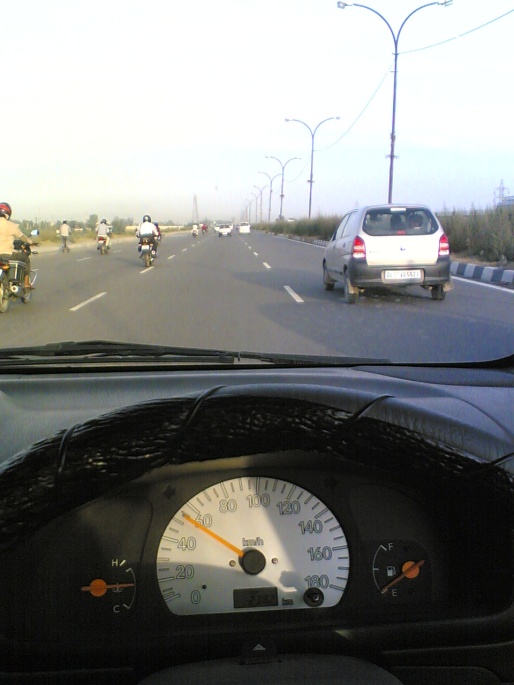 And its quite a shock to the body as well. After being at 100-120 kmph for over 2 hours , to suddenly drop down to 50 is a bit traumatic , not to mention that it can take a while to get used to it. END_OF_DOCUMENT_TOKEN_TO_BE_REPLACED

This work is licensed under a Creative Commons Attribution-Noncommercial -No Derivative Works 2.5 India License.